I think I’ve grown in my reading because I have read a lot more than I did last year. I also have been residing harder and more challenging books. In fifth grade I read easy books but this year I feel like I have pushed myself more to read more challenging books. One of the favorite books I’ve read is Between Shades Of Grey. Before I never thought I would read a book about war but then after I read that book I started to read harder books and more kinds of books. Now I don’t read a lot realistic fiction and I’m trying to read other genres like fantasy.

I think I’m the same when it comes to being responsible. I was responsible in the beginning of the year and I still am. I think I’m more perseverant because I try to do harder things than I normally would have. I think I’m still the same in being respectful and collaborative. I share my ideas more and I don’t really worry about getting them wrong.
I am happy with my progress in membean. I started out on level one but now I’m close to the end of level three. Though I feel like I’m doing less in membean than I did last semester. Last semester, I usually did 80 minutes but in second semester, I always get 60 minutes. I don’t do it much so I just get to sixty minutes and stop and I don’t do anymore. I should not forget about membean and keep going. One of my next steps about membean is trying to use the words because I learn them and forget to use them so there is not much use in learning them so I should really study the words properly and try to use them.
I think I did well in the podcast, my writing piece could have been clearer with my claim and details but I think I did good one the actual podcast. I know I spoke too fast but that was because I had a lot of information and I didn’t want to make the podcast too long. I enjoyed the unit of Greek myths. Before, I didn’t like reading myths and things about gods but after the unit, I liked it and started to read more myths and books like that. The debate helped me to understand how I can look at things both sides, lie, affirmative and negative. I didn’t want affirmative but I was assigned that but I learnt how to look at things and come up with arguments from either side, even if I don’t agree with it. I also feel like the debate helped me speak more confidently. The book clubs helped me think more about the book. So even if I’m not in a book club I should think more deeply about the book instead of just reading it.

I grew as a learner by having more stamina and reading more types of books. I speak more confidently and share my ideas more. My next steps are probably to speak more in class and I want to use harder words in my writing pieces and my life using membean. I want to write so that it’s clear about what I’m going to argue about. 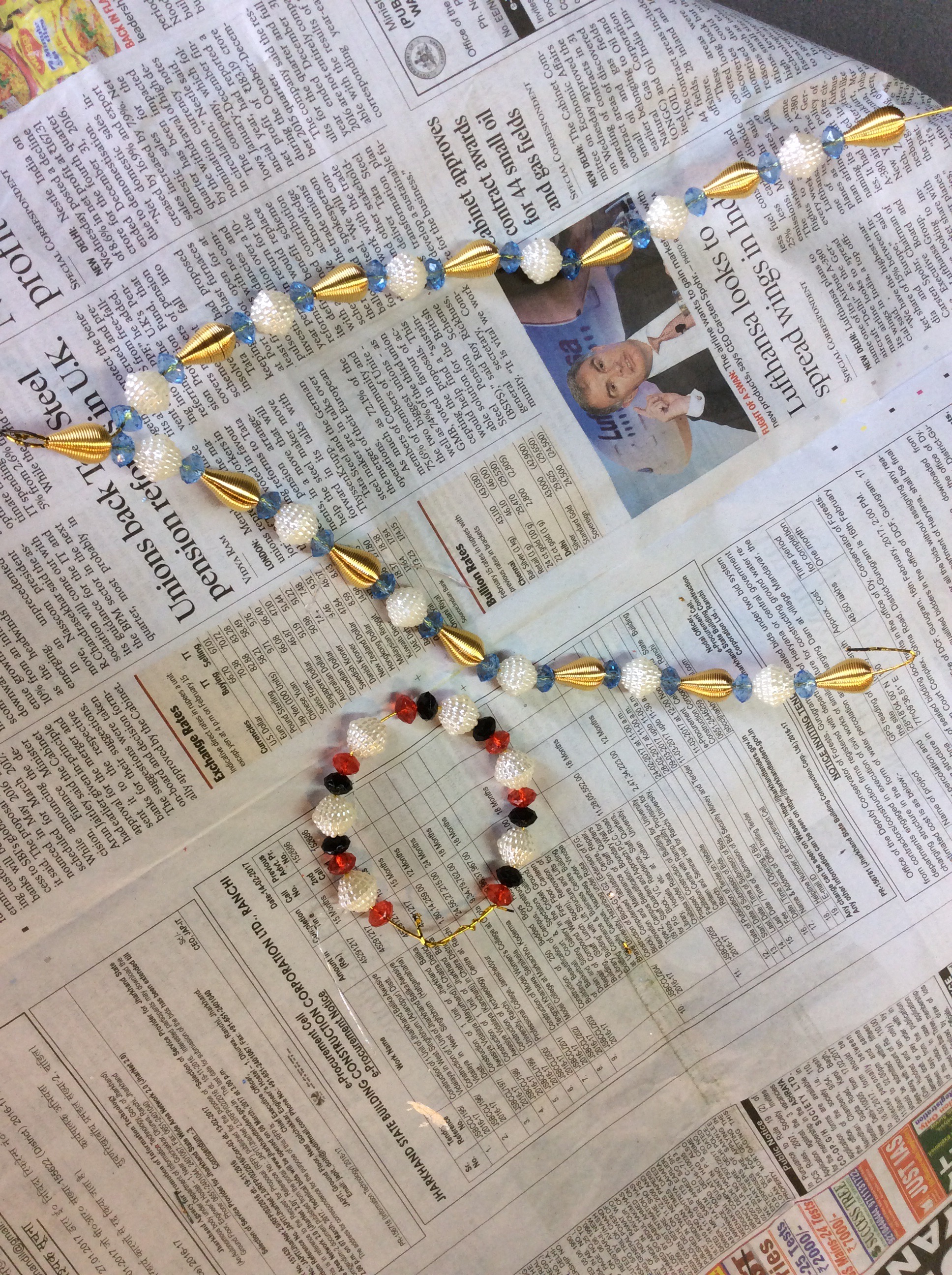 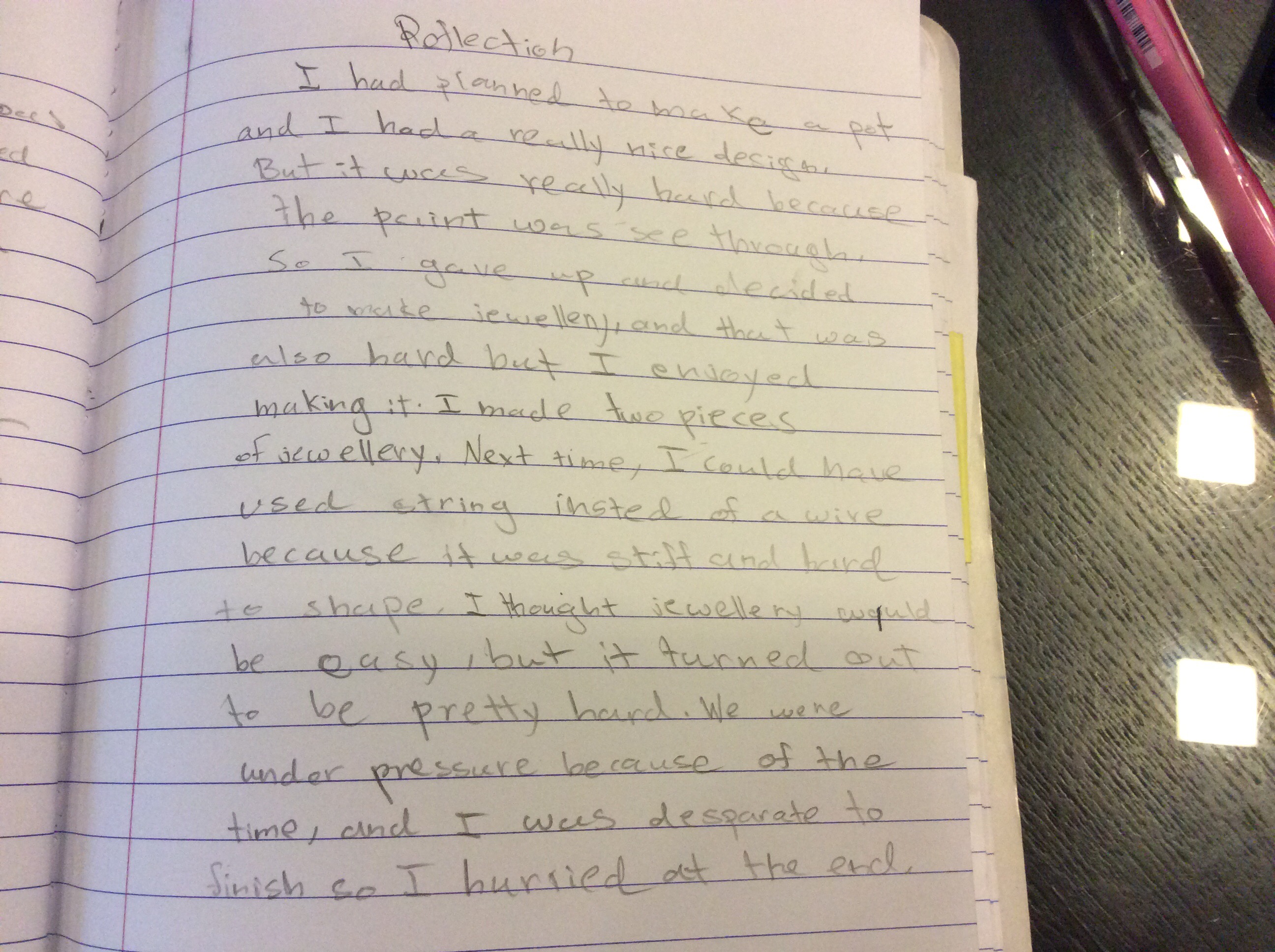 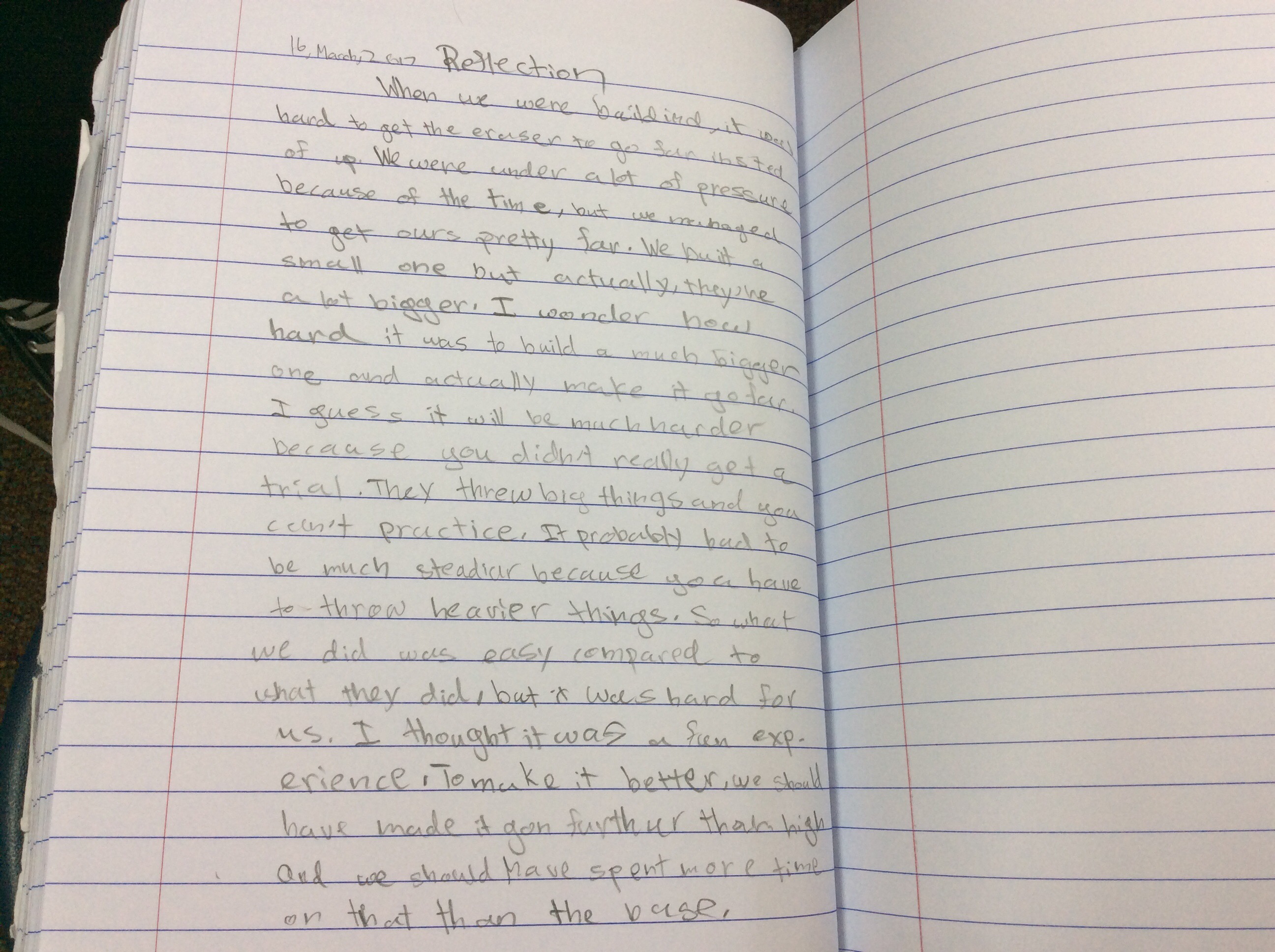 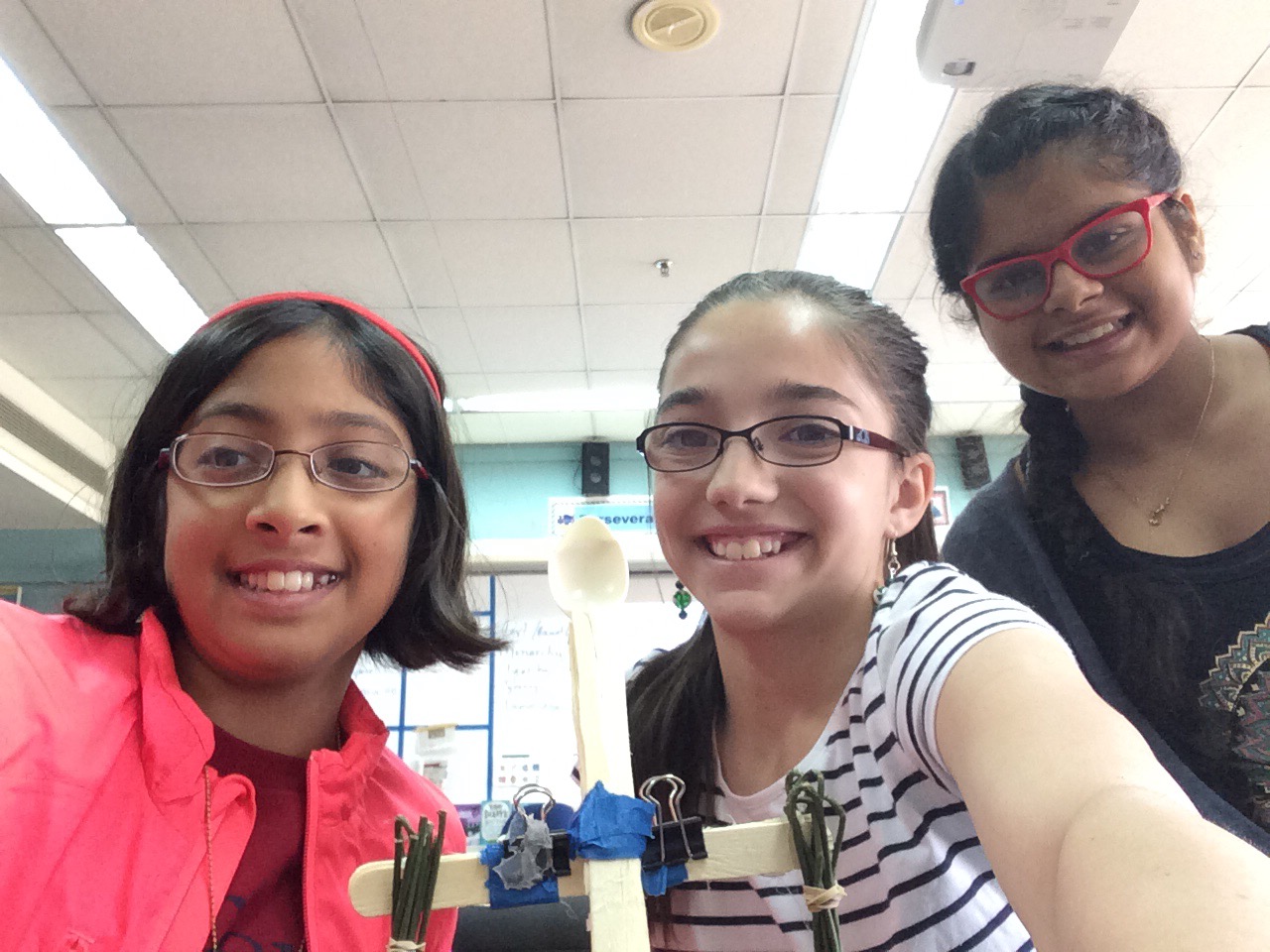 There are two systems of government, monarchy and oligarchy. Monarchy is when one person rules, and it usually runs in the family. If the king dies, his son will be the new king. Oligarchy is when a group of people rule. For every decision they make, they have to consult with one another. And if one of them might not agree, the others have the right to kick them out and they will replaced by a middle or low class person.

These are some of the advantages of monarchy.

You can’t get kicked out

You have all the power to yourself

Not much effort to decide the next leader

These are some disadvantages of monarchy

The people don’t get to say anything in the matter

The people didn’t have rights

The rules are strict

These are some advantages of oligarchy.

Weight of the kingdom isn’t on one person’s shoulders

Each noble still has some power

They got all ten food and riches

If one has some rash decisions, the others can talk him out of it

These are some disadvantages of oligarchy.

There will be a lot of arguing

You can get kicked out

You have to agree with everyone to make a decision

Service Learning Reflection:The ice cream simulation was when we got split up into three groups, chocolate, vanilla, and strawberry. What I noticed in the town hall meeting, was that most people from the chocolate group were saying that it was unfair. I think part of the ice cream simulation was trying to show that real life is unfair. It’s unfair to people who are poor.

I also think that another take away would be that you can’t really choose which standard you’re born into. When we did the ice cream survey, we didn’t know why we were doing it. When I ended up in the chocolate group, I wished that I had picked another flavor so I can be in another group. But in real life, you can’t choose which standard you want to be born because it’s not your choice. So it was unfair in the ice cream simulation, but life is also unfair. So one of my take always is that in real life it is unfair (just like in the ice cream simulation). My other take away is that if you want to build a community, you have to collaborate because that’s the only way you can build one. My last take away is that no one gets to pick or choose where they want to be born. It’s not anyone’s fault that they are poor or wealthy. It just happens by chance. 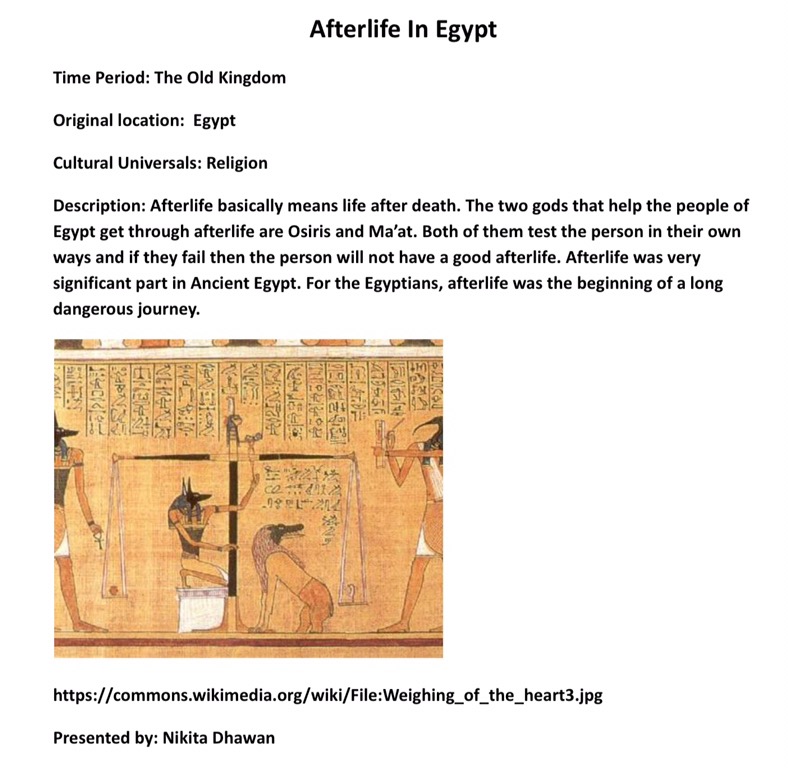 This is my video. I used noodletools to research about the four civilisations. I picked the afterlife of Ancient Egypt because it was very interesting. I wanted to do mummification but I found the afterlife and the gods involved in it interesting too. Afterlife relates to religion and I don’t think any other cultural universals.

It was a little hard to cite my sources at first. I figured out that links were not enough and I had to give more information. I got used to citing the websites and books I used. I think that noodletools is a very helpful way to cite sources and research.
The notecards made it easier to organise all my work. I also liked that we could put it into our own words. That made it easier and legal. Sometimes, I found it hard to organise my notes on paper but with noodletools, I got to put my different topics in different places which really helped. I think noodletools was very helpful and I will definitely be using it again. 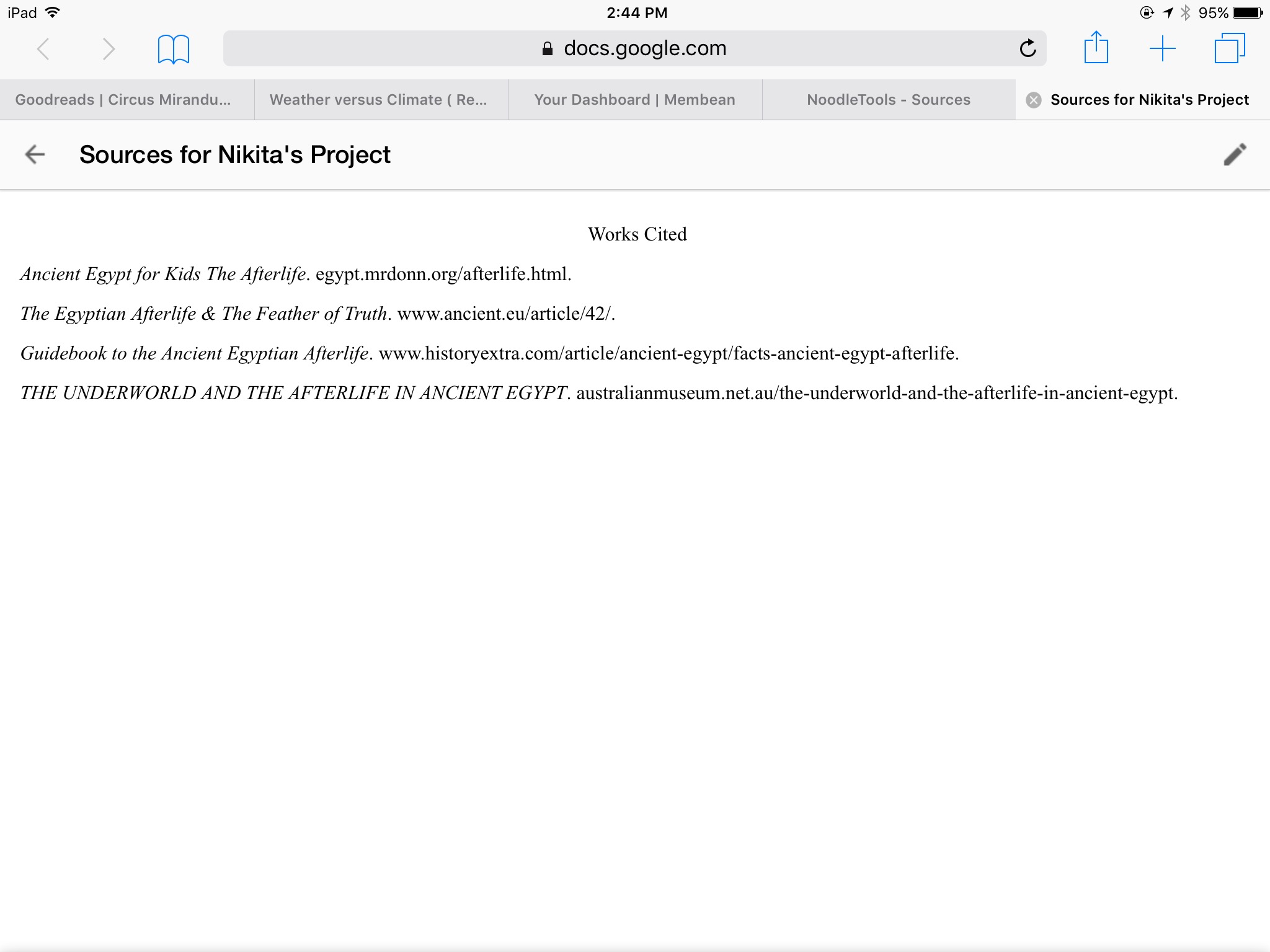